This is my first post of the new year and so many updates. All the ultra cliches about the unexpectancies of life prove true in the later part of 2011 for me. In October 2011, my mother was diagnosed with stage 4 pancreatic cancer which has spread to both liver and colon. The day after my mother’s diagnosis, I was on a flight back to the east coast. I’ve remained primarily on the east coast since. Its been a somewhat trying journey, (starting to realize its only the beginning). My mother who already struggled with fibromyalgia, went from tired to exhausted bedridden at the start of chemo. I’ve been my mother’s primary caregiver during the day, while my father who works long days, cares for her at night.

Chemo treatments are done at an outpatient facility and require that my mother go in Wednesday and Friday (bi-weekly). At my mother’s second treatment therapy, I noticed she was constantly talking of past memories, both the good and bad ones. I honestly don’t mind talk of memories, but it seemed that in all her memory talk she was preparing for death. I know that logic says that cancer is a terminal disease , but truth is none of us knows our time of death. I just prefer to live while I’m alive . To keep my mother’s mind away from the past and focused on creating new memories, I suggested that we take up crocheting as a joint project. My mother has always enjoyed crafts, including crocheting, sewing, and jewelry making. The suggestion actually went “Hey, I was thinking of crocheting a scarf. Do you think you could show me how?” Since then, the house has been full of yarn. Yarn everywhere. Its actually driving my father a little insane with all the yarn. But its been great having my mother re-engaged and creating new memories.

My crocheting hands and mother in the background crocheting 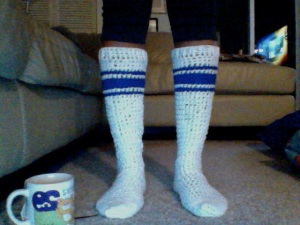 Update: My mother’s recent scan results show that the cancer is responding to the chemo treatment, and tumors that were in her liver are now gone. Still fighting until no cancer can be detected. #beatcancer

2 thoughts on “Yarns of Hope”