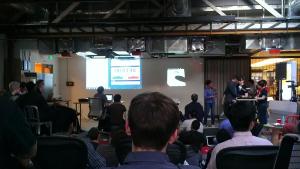 This weekend I participated in the AT&T Mobile HTML5 Hackathon. I had very mixed feelings in the beginning about my participation for multiple reasons. The first reason in which I was against participating is because I have a number of incomplete apps from previous hackathons that I have yet to complete, and I didn’t want another incomplete project. But the top prize was 20k. The second reason in which I was against participating is because I’ve seen a lot of hackathons warped with startup teams that have pre-existing applications and/or code , who participate in these hacks for press reasons or for the purse. There’s nothing worse than working hard during a hackathon and seeing the top prize given to a startup team with a pre-existing app. I just have a “traditional view” of hackathons, in which the competition should be based on the work performed during the event. So, I decided that I would attend the hackathon, but not enter into the competition. I would use the time spent at the hackathon to complete a previous project and learn about some technologies for mobile web. My goal: to convert one of my web projects into a mobile app.

Then, Alex Donn, the organizer of the AT&T hackathon, made an announcement at the hackathon. His announce can be loosely quoted as, “You will be judged on the work done here, we are checking githubs.” I was pretty impressed that Alex still honored the “traditional view” of a hackathon, and now the opportunity to win $20k appeared to be more fair. So new goal…win 20k.

20k requirements — application that made the best use of the AT&T API and Facebook Social Graph.

I already had an idea for the hack. My idea was to create a mobile app that recreates the mixtape experience, and it could be shared with friends. The vision was to recreate the nostalgic feeling around creating mixtapes on cassette with your favorite tunes. It also included the nostalgic feeling of sharing these tapes with friends, possibly a crush, or a feel better tape for a friend. It was simple app and could be done in the next 24 hours. Next step, find a team.

I recruited friend, Jennifer Arguello, who I met at a Woman Who Code event. She quickly pulled in Leah (I met previously at Women Who Code event), Jesse Martinez (I know from Latino Startup Alliance), and Harald and Brendan (her co-workers at Mozilla). As a team, we pitched a few ideas to each other, but it was decided that the Mix Tape App could be done in the time frame allowed. Friday night we went home roughly around midnight with a basic decision on what to build and which technologies to use. (Facebook Open Graph, AT&T SMS API, Tiggzi, Usergrid, Node.js, Backbone.js)

I’ll spare the exhausting details of trying to build an app within in a day. But here are some notes that I felt were important. Brendan, Harald, and myself were the developers. I am personally not very comfortable with front-end languages, and I include javascript in that mix. Of course, I’ve used javascript, but those callback functions get me every time. Its just something that I need to get over and just do more, because mastering javascript can be extremely powerful. That being said, during the hack I wanted to focus more on development on the backend. Plus, there was a cool demo by Tiggzi, which showed the ease in creating a mobile app. Harald and Brendan expressed concern about using unfamiliar tools and frameworks. But I saw this as an opportunity to make use of a hackathon sponsored app, and possibly win a secondary prize if not the first. I also met Tim from Apigee’s Usergrid. He sat down with me and convinced me of the magic of Usergrid. Between Tiggzi and Usergrid, I was convinced this app could be done with less effort. As I went to set up Tiggzi and Usergrid , Brendan and Harald focused on the music integration components of the app, using node and backbone. After arriving home at 1am, I stayed up til 4am learning both Tiggzi and Usergrid. We met back at the hackathon the next day at 11am on Saturday.

Saturday: 1pm (5 hours before the end of the competition) — Integration with facebook was completed using Usergrid and Tiggzi. Excited about this, I asked others to test it on a mobile phone. Ran into an issue using the base app on the mobile phone. So, the mobile web app worked through a web browser, and through Tiggzi’s framework, but did not work on a mobile phone.

Saturday: 4pm (3 hours before the end of the competition) — Still working closely with both Usergrid and Tiggzi with the mobile phone issus. We did discover that there was a bug in Tiggzi, where the facebook oauth callback would not work on a mobile phone. We wanted to demo the app from a mobile phone, not from the Tiggzi tool. Sadly, had to abandon the use of Tiggzi 3 hours before the competition ended. Brendan and Harald at this point had already created a cool search app for music using node and backbone, but the player functionality still need some work. With 3 hours remaining, our application still needed to be integrated with facebook and at&t sms. Harald was set to integrate facebook at this point. Brendan on fixing the player functionality and fixing branch issues. Myself, work on the at&t sms, which now needed to be done in node.js. (did I mention my anxiety with javascript? did I mention there was only 3 hours before the competition ended)

Saturday: 6:15 — I struggled with getting the sms working in node.js, and handed it over to Harald. Harald had gotten basic facebook integration and was able to retrieve a user’s fb friends, but had not gotten to the point where he could publish to someone’s timeline. He now had to deal with my failure of a mess with integration with at&t sms.

Saturday:7pm — Competition over. Our app had basic functions to search for music and play it from a mobile phone. However, integration with facebook and sms at&T was minimal based on time limits.

End result — The demo of our app went well. Received tremendous feedback from a lot of people about the app and most people loved the concept and believed it was a winner. Out of more than 20 teams that presented, we believed we were in the top three. When the judges deliberated, we were called up along with another team to verify features. The night was an anxiety rollar coaster. If we thought our app sucked, then it would’ve been fine. But we heard from many people that thought we were going to win it. If 20k was food, it was almost as if we could taste the 20k. End result, the other team won it. $20k. This is my story of how I almost won $20k. A bit disappointment, I went home and sulked on my almost 20k.

1) My goals changed throughout the hackathon. First, I just wanted a mobile app for one of my projects and then I changed to wanting to win the 20k, or a secondary prize. I went home with neither. I did learn some new technologies, but that wasn’t the primary goal of my participation. Lesson: Choose one goal, stick with it, aim for it.

2) I didn’t have a good plan for my goal for winning nor did I make it a primary focus. If the requirements of the $20k was best use of facebook social graph and at&t sms. The framework for integrating facebook and at&t should’ve been built first, instead of at the last hour. Lesson: Identify the basic requirements of the goal and work on it first.

3) The decision of learning new tools vs building within the comfort zone was a risky one. It’s pretty ambitious to build an app within 24 hours, even more ambitious to learn new tools and then build an app with them. I took a risk to try and learn something new in hopes that it would save time. It ended up costing more time. Lesson: Unless its specified in the requirement of the goal, build with tools that are familiar. 24 hours is not a lot of time.

Overall, the hackathon was great minus the almost $20k part. Met some new people and got to work with Harald and Brendan who were great teammates. The biggest take home prize for me was Usergrid and Tiggzi. I trust the bug in Tiggzi will be fixed soon. And I look forward to using both in my next project.

Yeah, I almost won $20k, but almost doesn’t count. Congrats to winners of the AT&T hackathon, Pic Plus! I’m sure it will be available for download soon in the AT&T App Market.

When Life Gets In The Way of Life